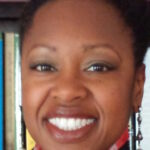 Richelle’s love of words led her to a career in journalism and teaching. For more than a decade, the West Philadelphia native worked as a journalist and university professor in the United States and Europe. She taught journalism at the prestigious Missouri School of Journalism and taught political science at Schiller International University in Heidelberg, Germany. Richelle worked as a reporter for American newspapers in Georgia, Philadelphia and Tennessee. She also worked as a reporter/photographer for the Stars and Stripes newspaper in Germany, where she deployed with U.S. troops to cover international peacekeeping missions and conflicts.

Richelle is a creative who loves to write, research, paint, craft and run. She is the author of Running for your life! A devotional for women who run slow, walk fast or jog with reckless abandon. She discovered her love of running while living in Europe. She competed in half marathons in Germany and Portugal. Writing and running are two ways she shares her faith and connects with others. She is a slow runner who doesn’t expect to break any speed records, but encourages others take up running so it can help break strongholds in their life — especially those that whisper, “It is not possible to follow your dreams.”

As a kid, Richelle dreamed of visiting Paris so she could retrace the steps of inspiring African American artists, writers and entertainers, like Josephine Baker, James Baldwin and Richard Wright. She dreamed of being a writer and telling stories about the world. Journalism took Richelle to Paris and many other places around the globe. Some of those locations were inspirational, some spiritual and others heart-breaking. Highlights include the Tavna Monastery in Bosnia and Herzegovina, the aftermath of an avalanche in Austria, war-torn villages in Kosovo, U.S. military security patrols in Albania, the castles of the Czech Republic and the majestic, stone cathedrals in Germany.

In addition to her love of travel and writing, Richelle loves to learn.  She has a doctorate in History, Studies of Security and Defense from ISCTE-IUL in Lisbon, Portugal, a Master’s Degree in International Relations from St. Mary’s University in Texas and a Bachelor’s Degree in Journalism from Temple University in Philadelphia.

When she is not running or writing, Richelle is painting in her SheShed or working in her garden. Richelle uses oil and acrylic paint to create works in the style of impressionism, abstract and post-expressionism. She is currently working on her first book of poetry.